Posted at 18:56h in Uncategorized by Bone and Joint Institute of Tennessee 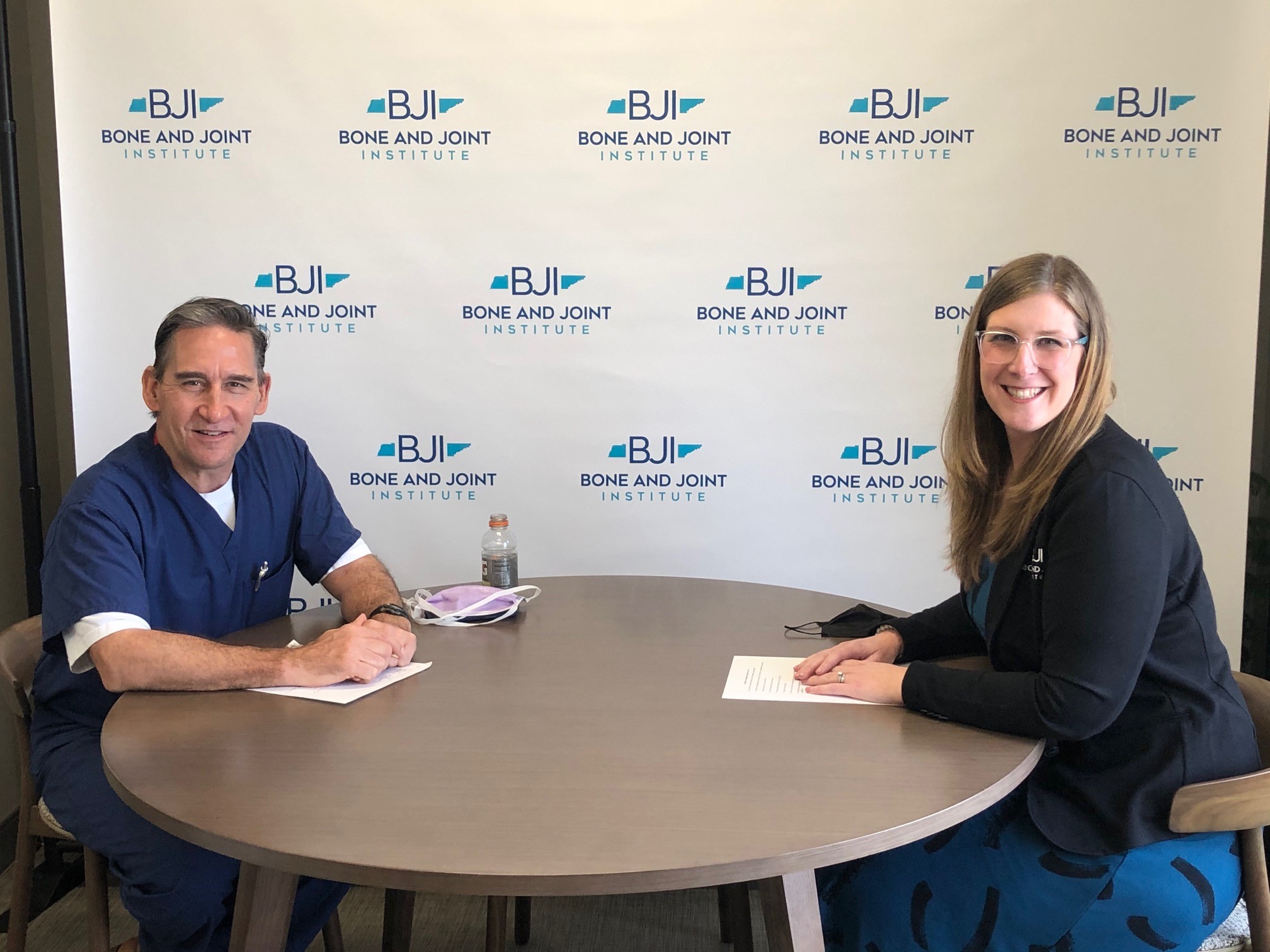 Can you tell me a little bit about yourself?

I’m a farm boy from Ohio and a Buckeye at heart. I moved here 25 years ago to join this group. In that time period, my wife and I have raised a wonderful family. During this time, I’ve been taking care of Ravenwood High School and their athletes, as well as other athletic programs around the area. Prior to that, I worked with college teams, and even a pro soccer team at one point. I’ve always been drawn towards sports, but I gravitated even more towards foot and ankle, even though I also have sports fellowship training.

Can you tell us how someone might get a stress fracture in their foot?

A stress fracture is an injury that is often caused by overuse and repetitive use. The most common places that we see it are when people are running, jumping, or really any kind of sport that requires heavy impact. Unfortunately, it’s an injury that often occurs when people are really energetic about getting back into some kind of activity that they haven’t done in a while. A lot of the time, it’s a training error where they go too quickly, and don’t acclimate back to that high impact activity like they should. It can even be something as simple as wearing shoes that are not supportive enough. It could also be something where it’s an intensity issue, where someone goes from a light activity to an intense activity and a short period of time. Whenever I hear a patient talk about boot camp of some kind, I know that’s always a situation where this could occur.

What exactly is a stress fracture and how do you diagnose it?

A stress fracture is like when you take a paperclip and bend it back and forth over and over. Just one little impact, injury, or episode is not really enough to break it. However, it’s the repetitive nature of that and a constant overload of a structure, in our case we’re talking about bones. Eventually the injury to the bone is breaking it down quicker than the bone can repair or protect itself, so gradually there is eventually enough of a localized issue that leads to that area breaking down and becoming painful. The interesting thing about a stress fracture is you don’t always see it on an x-ray, even though it’s there. I tell patients all the time that stress fractures often don’t show up for 2 to 12 weeks after an injury. Sometimes they never show up at all. Sometimes the only way that we can diagnose a stress fracture is with an MRI. With this, we can see what is called a bone bruise inside of the bone, which would not be shown in an x-ray. Suspicion is our best diagnostic tool to help evaluate that. Obviously there is pain and swelling in the area of the injury – that is pretty obvious as well. However, the suspicion of the injury is usually our key to heading towards that diagnosis.

Once you have that suspicion of a diagnosis of a stress fracture, what kind of treatments are there?

The first thing that we have to do is stop the activity that’s leading to the injury. Rest is going to be a necessary part of the treatment. It doesn’t necessarily have to be complete rest. We will have diehard patients who are really active runners and really don’t want to be off their feet or have to discontinue their training program. I always tell them, it doesn’t have to be complete rest, it has to be functional rest. This just means that there has to be rest where the injury has happened, and in our case we’re talking about from the knee down – from a tibia fracture, to an ankle fracture, to a metatarsal fracture. Basically, we have to do enough to make it not hurt, because if it’s hurting, it’s not healing. I’ve had world-class athletes who are off-road bikers, that we essentially just put into a pool and had them condition in a non-impact kind of way. This helps to maintain their conditioning so they wouldn’t lose what they had gained, but it still allowed them to heal their injury. Most people come out of that situation saying that they are coming out of it in better condition than they were going into it. So, we don’t have to put you in a cast, we don’t have to stop doing activities. Just participate in some functional resting.

Would someone wear a boot or some kind of brace for a stress fracture?

Typically we would use a boot. That is for a couple of reasons. One, to rest the area. Two, to reduce pressure and limit the load that some of that area is taking. Sometimes we go to some kind of orthotic, or an insert in their shoe to help relieve some of that pressure. Long-term, it’s helpful to upgrade shoe-wear and make sure that you have the proper fit, as well as making sure that you have the right type of shoe for the type of activity that you’re doing. More often than you would believe, a Vitamin D deficiency is a common precursor to that type of injury. That is something that we have often started to check for – a Vitamin D or Calcium deficiency. You would be surprised – too often we see those things. Because of lifestyle changes, we’re just not getting the exposure to Vitamin D through the sun like we normally would, and we’re not drinking as much milk. That’s a necessary part of the healing, and sometimes the part of the injury. For osteoporosis, for example, Calcium is important. Sometimes there can even be a little pathologic cyst, or a defect in the bone, which can lead to an area being more likely to break down. All of those have their own unique kind of treatment, but they’re along the same lines.

Is surgery ever an option or is this something that can mainly be treated nonoperatively?

Surgery is not ever a first option for a stress fracture. We usually take a conservative approach, because it’s more about reversing the injury. The only time that surgery ever becomes an option for a stress injury, is if we’re worried about the fracture becoming displaced. Say if it’s an ankle fracture, it could lead to instability of the ankle. Or if there’s a metatarsal fracture that becomes angulated, that would throw off the weight bearing distribution of the foot.

You talked a little bit about preventative measures and activity modifications, but are there any other ways to prevent stress fractures that you can tell us about?

I think the best thing that you can do long-term to prevent stress fractures is a few things. When you’re doing a sport that you haven’t done in a while, instead of going so hard and so intense, I would recommend cross training. This means you might bike one day, you might row one day, you might run one day. I would recommend intermixing those for a while until you’re acclimated. If you want to be a runner, you start out walking and do a lot of that. When you change shoes, walk in them before you run in them for an adjustment period. If you’re a runner and you have constant breakdown of shoes, I’ve even had those patients go see a special type of physical therapist who does running evaluations. They will videotape your running gait and evaluate that because it might be an issue with how you run.

Can you tell us about the comprehensiveness here at Bone and Joint Institute and how that helps the patient experience overall?

Our advantage of this facility and this group in particular is it’s a very cohesive group. We all work together really well. We have a great relationship with each other. We are obviously blessed with the location that we have and the facility that we have. It has allowed us to have as much one-stop access as we can. We also have imaging capabilities here, which are growing, and we will hopefully have an MRI here soon. We also have a CT scan and ultrasound. We have physical and occupational therapy that is second to none. We also have our Surgery Center downstairs, which allows us to operate and do a lot of our treatments here on site. We also just have a comprehensive team of mid-levels providers and physicians who work really well together.

More on the bone and joint institute of tennessee

For more information about stress fractures, call Bone and Joint Institute of Tennessee at (615) 791-2630. You can also schedule an appointment online.